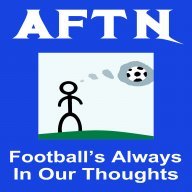 Leaving your home for a new country and a new culture is tough for most people, let alone having to do it twice by the time you are just 13-years-old. Factor in fleeing a civil war with your family, then moving across the new country you call home without them, to chase your dreams, and that’s a lot of upheaval for any teenager to endure.

Born in the Democratic Republic of Congo, Mukumbilwa fled his homeland with his family during the vicious civil war. Mukumbilwa’s memories of that time are very limited. He just remembers he was young and he had to flee. His family ended up in Kigali, Rwanda as refugees, managing to stay out of the camps and getting a house in the city.

It was there that his interest in football was piqued. The pitches were dirt, the facilities were basic and sparse, but a love affair was born. One which has now ended with him signing his first professional contract today as the Whitecaps’ latest Academy signing.

“I was about six years old,” Mukumbilwa told AFTN of when he started playing football. “When I was a little boy all my cousins, my brother, they all played football and just by watching them, I fell in love with the sport.

“I don’t think the dirt really helps you. If you’re talented, you’re talented. It’s just a matter of time till you develop into the player you want to be.”

His five years with the Whitecaps have helped that raw talent develop into something further, and he’s the latest prospect to come through the ranks and earn a contract with the first team. But let’s rewind a little first.

Although Rwanda offered a safer environment for the Mukumbilwas than Congo, Georges mother Feza wanted a better life for her family. Canada was to be the place to offer that and in 2013, when Georges was aged 13, they made the move to Winnipeg, Manitoba, along with his brother Tchakas and sister Faranga.

Mukumbilwa doesn’t know how his family ended up in Winnipeg of all places, but he’s very grateful for the opportunities it has afford them, and they settled in very quickly, even if the weather was an initial shock to the system.

“When I first saw snow, I was really excited,” Mukumbilwa said with a laugh. “Then I got tired of it by January! It was really cold.”

But it was there that Mukumbilwa’s footballing talents started to get him noticed. Playing for Portage Trail at the U15 level, he earned a call up to play for Manitoba’s Provincial Team in the Pacific Coast challenge, where he came onto the Whitecaps’ radar. The ‘Caps were so impressed with the 14-year-old that they offered him a place on the Residency program.

After a life of moving, Mukumbilwa and his family were finally settled in Winnipeg. He’d only been there for around a year but now he was being asked to uproot once again, only this time without his family coming with him. That’s a big choice for any teenager, let alone one that had been through as much as Mukumbilwa had up to this point. 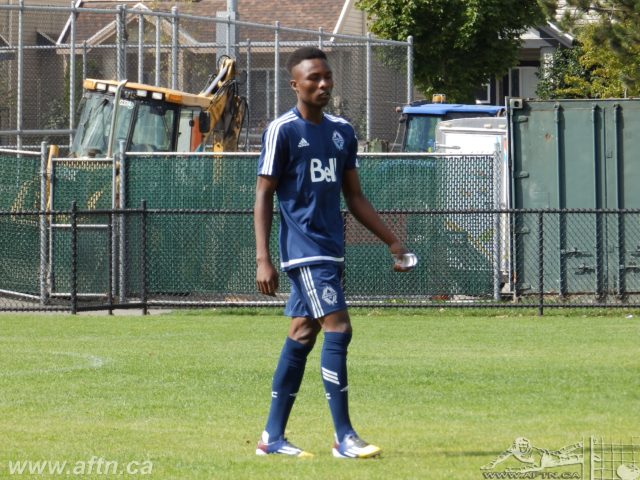 His mother wasn’t sure. Understandable really. But in the end it was his Portage Trail head coach Vince Scerbo, a man who Mukmbilwa cited as the biggest influence and mentor on his fledgling career, who convinced her that this was too good an opportunity to turn down for a young player with the talent of Georges.

“It was tough,” Mukumbilwa admits. “My mom didn’t want me to come. She didn’t want me to leave the house. She wanted me to go to school in Winnipeg but my coach back home told me it was a good opportunity and we should take it and she let me come here.

“But it was really tough. My first year I almost quit. I was thinking about quitting but my mom kept pushing me, kept pushing, and I adjusted.”

He adjusted well and he settled, helped by billeting with another newcomer to the Whitecaps Academy that shared a similar background, Alphonso Davies.

Seeing what Davies went through in first signing a USL deal and then a MLS contract with the Whitecaps, was a good thing for Mukumbilwa to witness up close. He saw the pressure and the hype that went with that, and how Davies coped with it and kept grounded, and it’s only helped him prepare for his own big moment.

“He was a young boy when he signed,” Mukumbilwa mused. “When he went through all of that, it definitely taught me something.

“This is what I’ve always wanted. Some kids don’t have patience. I just stayed patient and I kept working hard and now I’m here.”

Mukumbilwa and Phonzie still chat nearly every day, but he hasn’t spilled the beans about his big news yet, joking that “he’ll just hear it along with everyone else”. But he knows his former roommate with be delighted for him, as are his brother and sister, and his mother, who flew into Vancouver on Thursday morning to be there for her son’s signing.

“She was really happy,” Mukumbilwa said of his mother’s reaction when he phoned her with the news. “She wasn’t actually home, she was at work. She had to take a break. She cried.” 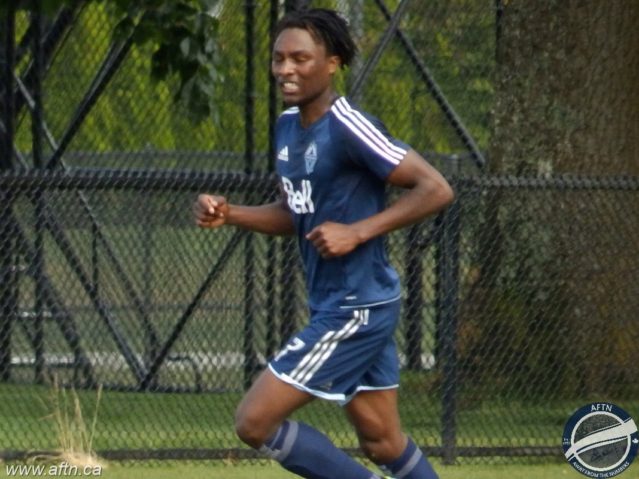 Mukumbilwa only found out he was getting offered a homegrown contract this week. College was an option for the 19-year-old but he’s been impressing as part of the Whitecaps Development squad this season, after four years of playing with the Academy, and becoming a professional footballer was always the career path he was working towards.

“It feels great,” Mukumbilwa said of taking that next step. “This is what I’ve always been dreaming about. I’ve been here for five years and all five years I’ve been working hard and it’s finally paying off now. I’m just really happy. I was all smiles when I heard.”

And that work ethic is certainly part of what has attracted ‘Caps coach Marc Dos Santos to signing Mukumbilwa to a Homegrown deal. Talk to anyone involved in the Whitecaps Academy about him and the words “hard work” are a common theme.

“We saw there some attributes, some qualities, that were very interesting for what we want to do and for what MLS is about,” Dos Santos said of what he’s seen from Mukumbilwa so far. “This is just a step on the possibility to grow with the first team. It’s more a signing looking at the future and possible opportunities for him.

Dos Santos got his first look at Mukumbilwa in preseason, when he was one of eight Academy players in camp. While the ‘Caps coach has noted that that wasn’t ideal first team preparation for the season to come, for the likes of Mukumbilwa, it provided him with the chance to impress and stand out.

That he did, getting minutes in matches in Hawaii and California and crashing a shot off the bar against the LA Galaxy. He looked right at home alongside the rest of the first team, with nerves reduced by having players around him that he knew so well from the Academy.

“It kind of made it easier a little bit,” Mukumbilwa admits. “For me, I was just working hard. I wasn’t really too focused on whether I looked out of place or not. I was just trying to help the team and do what I could for the team to win some games. That’s all I was focused on.

“I wasn’t really nervous. From August last year to January I was just working hard because something was telling me in my head that I was going to preseason and I was just preparing, getting ready for it.”

It also gave him an understanding of what moving up to the next level, and the adult game, would mean for him.

“There’s a big difference,” Mukumbilwa notes. “The game is faster. You have to limit your touches on the ball. Everything is faster.”.

But he’s been drawing inspiration from Theo Bair’s breakthrough, a player he’s spent a lot of time with in the Academy and the Development Squad and who he describes as “a hard working guy.” That’s the work ethic he’s wanting to bring along to the first team now.

Mukumbilwa has played most of his football in Vancouver on the right wing. That’s his preferred position. Hs favourite player right now is Kylian Mbappe, a player he describes as “fast, strong, and really direct”, but of late the Whitecaps have been looking at him in a different role, as a right back.

He’s just happy to play where the team feel they need him most and he can perform at his best and converting wingers to fullbacks is often a successful strategy for team that likes to play the way that Dos Santos would ideally have the Whitecaps doing.

What that means for his Whitecaps future remains to be seen, but he’s been turning heads with the U23 team with his performances, while training regularly with the MLS squad. He’s still very much a work in progress, but he’s another exciting prospect to make the breakthrough. As we always say though, the hard work really starts now. But if there’s one thing we’ve learned about Mukumbilwa over his five years here already, that’s certainly something he doesn’t shy away from. 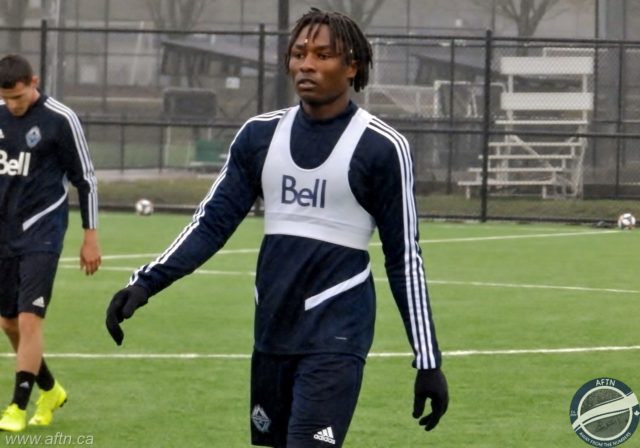