First week of the new season is upon us! This may be arguably the most competitive the division has been in recent years. Last year crowned a new league champion in undefeated West Van. Chile surprised with a double in the League cup and the Provincials. This may have lit a fire under the asses of former masters kingpins in Metroford. Westside will look to have a bounce back year after going trophy-less. Columbus will look to close the gap on the top of the group.

It may be a dog fight in the bottom half of the division. Croatia is usually a solid middle of the pack team and defensively sound but scoring has been an issue. PCOV had a very slow start to the season but found a way to right the ship when it counted the most and played well in the league cup. Romania have signed a couple of solid players and look to stay out of the basement. New boys Norvan come up from Div.1 boasting a +76 goal differential although that division was a mess last season with having absorbed the div.2 teams. A solid league cup run 2 years ago is still fresh on the minds of many but can they keep it consistent over the course of the season is the question. We all know the jump from div.1 to Prem is quite significant and we(VUFC) have experienced those growing pains having been in relegation battles in consecutive years. We get another chance at it again this season and are hoping year 3 is the lucky charm. Good luck to all!

-15minutes in our player gets his ankle broken on a bad tackle. Will need plates and screws. Sucks!
-Fetterly gets on to a corner kick and his effort was cleared off the line. However the rebound bounced right back to him and he slotted the ball home through a crowd inside the six.
-a few minutes later I get hacked down in the box for a pk. I step up myself to take it and their goalie saves my effort low to the left. Rebound was cleared just before being poked in.
-they come back down the field, get a pk of their own and Dailly buries it. 2-0.
-we hit two crossbars down and out
-strange 3rd goal. the ball was in our end and our player tried clearing it only for the ball to hit a West Van player and rebound agonizingly passed our keeper.
-West Van had more possession but less real scoring chances(according to the ref). Although I found that a little flattering. Probably more even on scoring chances.
-and the usual chippyness in our games of course.

Not the ideal start for us but a few positives in there. Looked like West Van were missing a few players. They only had a couple of subs.

Machel you have a chance to improve your prediction record this week. The following are this week's prediction from a more pragmatic source:

Columbus 4 VUFC 1 on a header

Predictions for me and @Sir M because we're the only two in here! lol
Here ya go buds:

Columbus vs VUFC - we hope to finally take points off of these guys!

Romania vs PCOV - PCOV have stepped it up since the final third of last season. Basing this one on form.

Westside vs Chinter - JoMo and Corraza are believed to have come with the merger which will definitely boost their attack.

One more than Canuck4ever on his golf thread...
Reactions: machel
A

Not much to say in this one. They were the better team.

Columbus is like a new team in the league. They have many new players and it’s dropped their average age down by 10 years! Their div.1 team played the game before us and players like Deblasio and Blair played for the masters team. I didn’t see Poli and only wonder if he’s old enough for masters. Of course some of the old guard are still around and @LION got on the scoresheet. Columbus could definitely have something to say this year!

Tough one for EDC/Inter as they lose what amounted to the final of the Westen Canadians today, going down 1-0 to Alberta.

What a weekend with some interesting results!
Norvan cruised by Columbus 4-1. PCOV knicked off Metroford 3-2 and Romania tied Westside 1-1. Wish we could have held our lead to get a result vs Croatia..ended up 2-1.

So far this year no team has yet surged forward of the others at the top; it appears several teams are contenders. Things may. or may not, get a little sorted this week. All games tomorrow night.

Romania vs Metro Ford. Metro Ford have had a little stumble going forward and are a lot stronger at home than away traditionally. They did however drop a close one at home to PCOV last week This week they will bounce back Metro Ford 4 Romania 1.

PCOV vs VUFC. PCOV have had a dream start, and VUFC has not had the start they wanted at all. VUFC traditionally play PCOV very tough and will be highly motivated here. If VUFC were at home I would say that they could get some points from this one. But they are not, and I dont think they will unfortunately. PCOV 3 VUFC 1.

Croatia vs Norvan. An intriguing one this one. Croatia have started a lot better than in recent years. Norvan got a postponement for a social function and shocked Columbus last week. I am going to say they come back to earth this week. Croatia 4 Norvan 2.

West Van vs Westside. West Van has only played one game this year, and Westside is making a good start. I think this one will depend a lot on who is in goal for both sides. After some thought, I will give the nod to the home team. West Van 2 Westside 0.

Columbus/Chile is postponed due to the Western Canadians having taken place last week.

It's been a tough year so far for predictions as a lot of teams have had some turnover and look very different as last weeks results can attest to.

Here we go:
Metro Ford vs Romania - If MetroFord losses any points here then maybe they're getting too old or are missing key players. This one should be in the bag...right? Romania coming off a decent draw with Westside.

PCOV vs VUFC - we need to get a fcuking result. PCOV have been good thus far.

Croatia vs Norvan - Was every shot going in for Norvan last week, were they lucky?..or are they legit? Guess we'll find out this game. I'll call it a draw.

West Van vs Westside - An already important game if Westside are to compete at the top of the table. They may want to win this game just a little more than there counterparts. 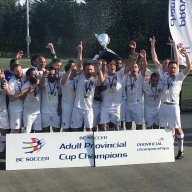 I guess you disgust easily then.

A very workmanlike performance by us as PCOV enjoyed the lions share of possession throughout. We forced them to take long range shots and our keeper, who’s actually a defender, did well to keep some stingers out. We had a chance to score in the first half when our winger was put through on goal. The shot was saved and I pounced on the loose ball, waited for an opening and shot only for a slight deflection to take the ball agonizingly wide. Down the other end PCOV thought they had scored but the ref blew for offside...must have been for their attacker being behind our goalie even with our defender on the goal line(two players rule for simplification). If not then I have no idea where the offside was from. 0-0 at the end of the half.

We scored around the 60th with a dipping shot over their keeper from about 25yards out! PCOV then amped up the pressure and almost scored off a goal line scramble and we were lucky the ball was shot right at our stand-in keeper from in close!
Frazao then hit the top of the net from a free kick. I thought it had gone in, close one.

It was ugly at times but we’ll take it. On to Metroford next week.

1 for 4 this week...although at least I tried picks in all four. MF made it easy against Romania and Norvan thumped Croatia. Westside and West Van drew at deuces; dodgy goaltending and more bars than Machel celebrating his team's rare victory last night.

We lost Wilton over the summer as he decided to sign with his old club. Huge loss for us and I’m not surprised he’s sniping them goals for Norvan.

Gotta celebrate them wins when they come along!

I do not understand guys transferring from one team to another in the same league/division in Masters. I know in Premier the guys get paid five figures to go over to the dodgy proceeds teams but Masters I don't figure.

Sir M said:
I do not understand guys transferring from one team to another in the same league/division in Masters. I know in Premier the guys get paid five figures to go over to the dodgy proceeds teams but Masters I don't figure.
Click to expand...